A novel cooling system in the ethec city electric motorcycle ensures a longer service life for the battery cells. In order to introduce the students to manufacturing processes that can be used for series production outside of prototype manufacturing, voxeljet produced the mold for the innovative battery housing of the prototype using the binder jetting process.

A student focus project at ETH Zurich is realizing prototypes of a new type of cooling system with support from voxeljet. 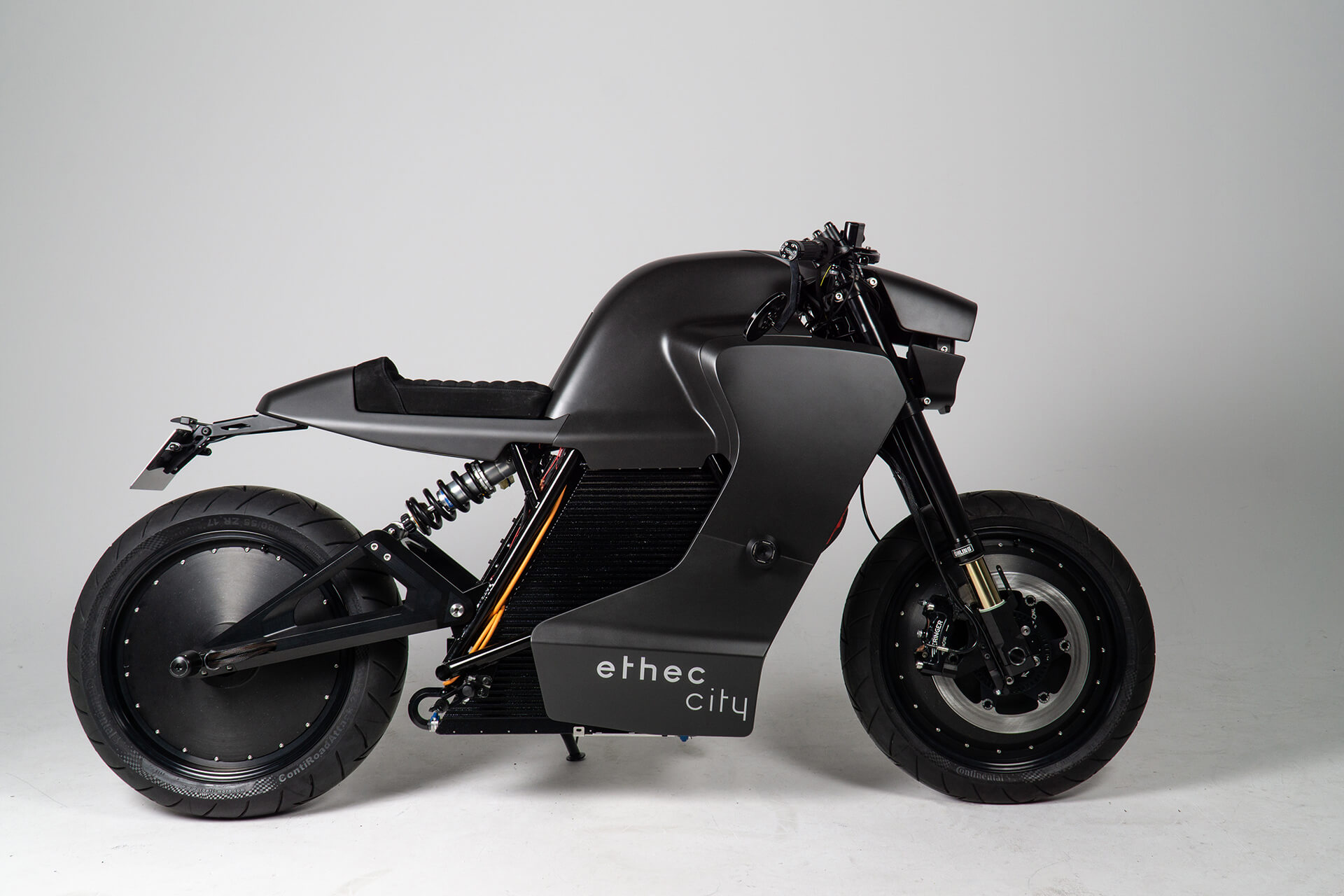 Traversing the vast landscape at breathtaking speed and almost silently on an e-motorcycle: What is taken for granted in science fiction films is severely thwarted in the present by the pitfalls of battery technology. In 2021, high speed and long range in e-mobility are practically always associated with extremely heavy and voluminous energy storage systems. Cars and trucks may already offer the necessary space, but the art of engineering still has a few hurdles to overcome on the way to a climate-friendly e-motorbike. The comparatively powerful e-motorcycles already available on the market are more suitable for urban traffic than for extended cross-country trips due to a lack of battery capacity.

The technological approach of the ethec city project could change that. ethec stands for “ETH Electric Cruiser” the concept of an electric motorcycle developed by students at the Swiss Federal Institute of Technology in Zurich. Within the framework of “focus projects”, ETH students are given the opportunity to implement their theoretically acquired knowledge in real technologies.

The project sponsor is inspire AG, a strategic partner of the university that accompanies the technology transfer of research results into practical applications. In the ethec project, which started in 2017, the aim was to significantly increase the efficiency of e-motorcycles via the recovery of braking energy and a modified battery design. At the same time, the team of mechanical engineering students, prospective electrical engineers and future industrial designers had to decide which processes would be most suitable for manufacturing the required components in each case. Since the initial focus was on a prototype, 3D printing was the main focus of attention.

The Swiss inventors implemented recuperation, i.e. the recovery of braking energy, by installing a wheel hub motor in the front wheel of the bike.

The question, of how to best store the additional power available to increase the range, proved to be much more difficult. Creating a high energy density in the smallest possible space is one thing. However, keeping the heat generated during battery operation at a constant level is more difficult on a motorcycle than in a larger vehicle. However, optimum temperature management is crucial for the service life of the battery.

“Battery cooling in e-vehicles is normally accomplished with a coolant that flows past the cells through a hose or pipe,” explains Dr. Josef Mayr, Group Manager Thermal Simulation at inspire AG and coordinator of the ethec project. “The disadvantage of this method is that only spot or linear contact is made and direct contact with the cells is not actually achieved.” In view of the limited space in the middle of the motorcycle frame, only one concept was ultimately possible: complete embedding of all battery cells in a bath of oil.

The ethec team used the cooling system of transformers in the substations of the major power grids as a template. “Sparks fly when the equipment is switched on,” says Mayr, “but because the units are completely swimming in silicone oil and thus there is no oxygen, there can be no short circuit.”

3D printing sand mold as an entry into series production

Split between two modules, the ETH students assembled a total of 1,269 lithium-ion round cells with a total output of 15 kWh. Computer-aided flow simulations were then used to create the optimal structure of the battery housing, which not only had to be absolutely leak-proof, but also had to ensure perfect contact between the individual cells and the flow of silicone oil. However, an object the size of the ethec battery housing exceeded the capacities of the available direct metal laser sintering (DMLS) equipment. And in order to “show the students the way from prototype to series production,” according to Josef Mayr, the choice fell on metal casting. Specifically, a 3D-printed sand mold was used as a template for casting an aluminum-copper alloy – in short: printed casting.

The digital CAD data of the battery housing provided by the ethec team formed the basis for voxeljet to produce a sand casting mold using binder jetting 3D printing. In this process, a few micrometer-thin layer of quartz sand and a binder jetted onto it are alternately layered on top of each other until the specified geometry of the later component is printed with the highest precision. The ETHEC battery housing was finally casted in the aluminum foundry of Kupral Spa, based in Brescia, Italy.

Full-scale practical testing of the ethec prototype is currently still pending. But the concept of an energy-efficient e-motorcycle devised by students shows impressive potential: The top speed should reach a maximum of 160 km/h, and thanks to recuperation and the novel battery concept, ethec city could achieve a range of around 400 km. Whether the concept will also convince potential buyers remains open for the moment – the search for a partner for the industrial series production of ethec city is still ongoing.

By clicking on "Accept", you accept the storage of first and third-party cookies on your device, including profiling, to improve navigation of the site, to detect site usage statistics, to obtain information about our advertising campaigns. You can decide to allow the reception of all cookies or only some categories of them.
Cookies policy has been updated since your last consent. Check the preferences you have already expressed about the categories of cookies you want to allow installation.